Tribute is paid to the following 14 Canadian Flight Sub-Lieutenants, who having undergone basic training at Royal Naval Air Station Crystal Palace, London, after seaplane training at RNAS Windermere were transferred to RNAS Calshot. Their achievements included 2 Distinguished Service Crosses, 1 Distinguished Flying Cross and a mention in dispatches. 3 of them gave their lives.

The extract below from a flying instructor’s log book on F.B.A. Type A flying boats, lists the surnames of his pupils in the ‘Passenger’ column: 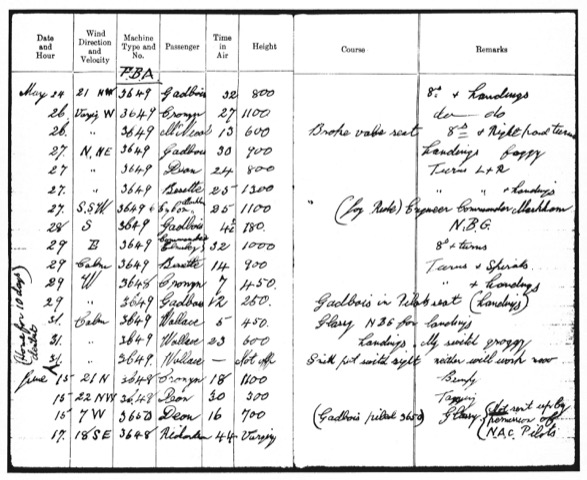 The photo at the top of this page, taken in front of the accommodation block at Hill of Oaks, also includes Calver Victor Bessette of New Bedford, Massachusetts, age 28, who was part of the intake on 03/05/1916. Awarded UK Certificate No. 3125 on 23/06/1916 at Windermere. Also awarded the Distinguished Flying Cross on 03/06/1918, for services over the North Sea.

The final officer-in-charge of RNAS Windermere was Robert Alexander Campbell of Uxbridge, Ontario, born on 24/01/1893. Awarded UK Certificate No. 3197 on 27/04/1916 on a landplane at RNAS Eastbourne. Served on HMS Campania. Posted to RNAS Isle of Grain.