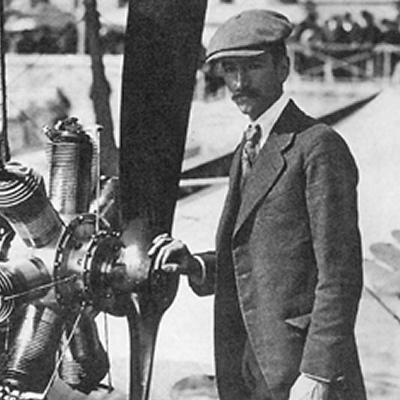 On 28 March 1910, Henri Fabre flew his Hydravion, also known as Le Canard, from Etang de Berre, near Marseilles, so achieving the first successful flight in the world from water. All the more remarkable since he had never been on an aeroplane before, either as a passenger or as a pilot.

Edward Wakefield had visited him at Marseilles shortly beforehand. Wakefield did so again, this time in the company of Oscar Gnosspelius, during October 1910 at the Grand Palais, Paris where Fabre’s aircraft was being exhibited – see  photo at the top of this page.

The Hydravion was transported by using a dolly.

Like Waterbird, the Hydravion had a Gnome 50 hp engine. Its installation ‘was recommended by Laurent Seguin, the inventor and a relative’. – Rear Admiral L McCready, W.W.1 Aero September 1983.

A diagram of the airframe is here.

Fabre’s floats were flat-bottomed, with a curved upper surface, so as to generate lifting force either in the air or on water; in contrast to Wakefield’s floats which were ‘stepped‘.

In 1910, the Hydravion was flown by Louis Paulhan. Paulhan designed a biplane landplane using the Fabre-type of construction for the wings, but by March 1911 that construction had been abandoned in favour of conventional main spars.

On 12 April 1911, at Monaco, Fabre’s aeroplane was damaged beyond repair when flown by Jean Bécu. Nevertheless, it was restored and is now in the Air and Space Museum, Le Bourget Airport, Paris.

Fabre sold a Hydravion to Raoul Badin, one of his employees. Badin attemped to fly it from lac d’Enghien, near Paris. – In 1911, Badin invented an airspeed indicator, which became known simply as the ‘Badin’.

Whatever may be said as to whether the Hydravion was of a ‘normal’ type, Fabre deserves great credit for not only proving it was possible to fly from water when others had failed but also for the design of his floats. Significantly, Edward Wakefield (twice), Oscar Gnosspelius and Glenn Curtiss all went to visit him prior to their float successes.