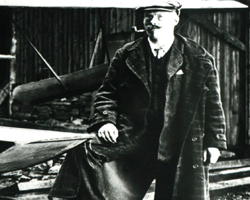 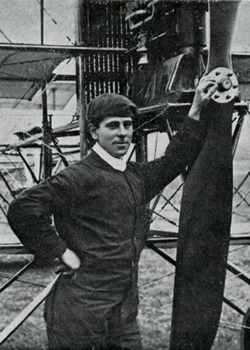 Brownsfield Mills was built along the Rochdale Canal in 1825 at Binns Place, Great Ancoats Street, Manchester.

Humphrey Verdon Roe inherited the business of H. W. Everard & Company, which made Bull’s-Eye men’s trouser braces and all forms of belting and webbing at its factory at Brownsfield Mills. With his brother Alliott, he founded A. V. Roe & Company (‘Avro’) on 1 January 1910; the production of aeroplanes would be by Alliott in the basement.

At that time, Avro was willing to accept commissions, and Humphrey replied to adverts in Flight magazine by Edward Wakefield. Following a meeting with Alliott on 26 February 1911, Avro constructed the aeroplane which was to become know as Waterbird (it was not assigned an Avro ‘Type’) in their workshop at Brownsfield Mills.

On 25 May, transportation took place to Brooklands for testing. This photo is of the prototype Type E hydro-aeroplane being manufactured in the basement, which was taken by horse and cart to London Road (now Piccadilly) station: it is presumed that the same method was used for Waterbird. Onward from Brooklands to Windermere was on 7 July, where conversion took place to a hydro-aeroplane.

Gertrude Bacon, who flew as a passenger at Windermere in 1912, wrote in her book Memories of Land and Sky ‘I visited the aerodromes and aeroplane works that by then were springing up in all directions. One of the earliest of the latter I found in a mill outside Manchester, where half the building was devoted to the manufacture of men’s braces, and the other to ‘Avroplanes’. Of the former the most romantic example was undoubtedly the Lake of Windermere’.

The plan dated 9 March 1911 of Waterbird, an Avro Curtiss-type, is the oldest surviving Avro aeroplane plan and is signed by Avro’s works manager Reginald Parrott.

The rudder is the oldest surviving part carrying the ‘A. V. Roe & Co.’ legend.