On 25 November 1911, at Windermere, Waterbird became the first hydro-aeroplane to successfully take off from and alight on water outside of France and the USA. A telegram from the pilot Herbert Stanley Adams confirms the initial flights and that no damage was sustained. 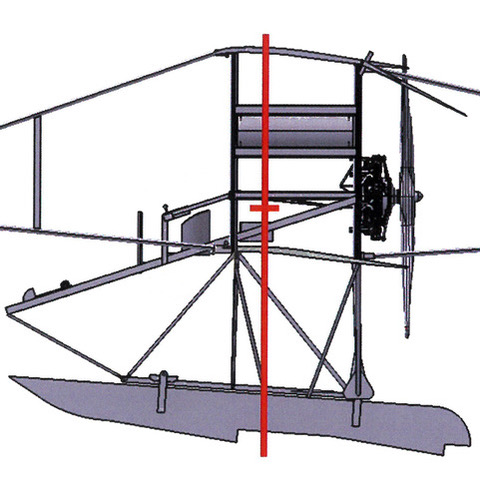 Waterbird was at the forefront of technologies. This was the world’s first successful flight to use a ‘stepped’ float, patented by Edward Wakefield along with the means of attaching the float to the aeroplane by bungees. Also, it used ailerons, rather than wing warping, an Avro control column and Avro turnbuckles. – See below under PATENTS.

Waterbird was an Avro Curtiss-type, built to the order of Wakefield by A.V. Roe & Company (‘Avro‘) as a landplane at Brownsfield Mills, Manchester.

Power was a 7-cylinder 50 horse power Gnome, the lightest engine per horse power then on the market, judging by its rating per cylinder. As a rotary engine, the cylinders rotated as did the crankcase, upon which the propeller was mounted, around a stationary crankshaft. The Gnome engine had been designed in 1907, patented and built in 1908 and established as a success by mid-1909. Neither an Avro nor a Curtiss had previously flown with a Gnome.

Upon transfer to Brooklands on 25 May 1911 for testing, alterations included extension of the upper wings, the ailerons were disconnected and smaller straight trailing edge ailerons were added. Therefore, the original ailerons with semi-circular trailing edges became the inner ailerons, and serve as part of the wing once enough forward speed has been achieved so as to raise them. Delivery to Windermere took place on 7 July.

‘My object has been from the first to eliminate every source of danger in flying that could be eliminated. I claim to have succeded so far.’ – Letter from Wakefield to Flight magazine, 11 January 1912.

By 29 March 1912, Waterbird had accomplished about sixty flights on thirty eight different days.

In The Aeroplane magazine, 13 and 20 June 1912, it was reported that Adams had found difficulty in judging height when landing on still water. That is, ‘in a breeze the ripples give a measure of distance, but on still water one sees considerably below the surface.’ Sheets of newspaper were spread on the surface to assist pilots. This condition is known as ‘glassy’ water, and was recorded by instructor Henry Reid in a log book entry for 15 June 1916.

In that Wakefield’s seaplanes did not exceed 70 mph and were very stable, then they were themselves not suitable for offensive military purposes. Rather, he envisaged use for military scouting.

At about 9:45 pm on 29 March 1912, the hangar at Cockshott, which housed Waterbird and Gnosspelius No.2, collapsed. It would appear that the builders of the hangar had failed to adequately secure it to the wooden piles.

Such was the strength of the wind, that the hangar was lifted into the air and carried a few yards so as to collapse in a tangled heap of wood and metal. Whilst the splintered spars and torn fabric of the starboard mainplanes of Waterbird protruded from the hangar’s truss, the canard, centre section, two stringers, engine (which lived on in the Avro Duigan/ Seabird), a tank, horizontal tail, rudder and main float survived. Albeit that falling beams had crushed the mainplanes, the curvature of the Belfast-pattern corrugated iron roof protected the remainder. The location of the hangar can be orientated by reference to the domed house on Belle Isle which is visible on these photos.

Firstly, a photo includes the engine, albeit with only one propeller blade, placed upon an upturned box and a tank propped against a beam, with the crushed elements of Waterbird in the background. Secondly, this photo at the re-erected hangar (Note the internal and external shoring) depicts damaged Waterbird wings and a new rudder leaning against the rear gable, bamboo outriggers on the floor by the side wall and sections of wing being built.

Waterhen, Waterbird’s successor, first flew on 30 April 1912. It was entirely designed and constructed locally, save for the engine. The float was of a new type, much broader at 6 feet with a single step and sheer at the bow, so as to enable Waterhen to be capable of carrying a passenger. The shortness of the timescale to the first flight indicates that mainplane sections, incorporating ailerons designed with straight trailing edges, must already have been under construction for Waterbird at the nearby boat workshop of Borwick & Sons.

It may therefore be concluded that ‘this photo’ above is of the build of Waterhen. Waterhen was the most successful Windermere-built seaplane, the last known flight being on 16 August 1916 when Edward Haller became the final pupil to pass the tests for his Aviator’s Certificate.

A photo of the hangar at Cockshott, with the Deperdussin, includes stacked sections of bamboo for the outriggers of Waterhen. It also shows the addition of a ‘skirt’ to the port side of the float, probably to counter propeller torque.

DIFFERENCES BETWEEN THE REPLICA WATERBIRD AND THE ORIGINAL

The original had a second-hand 7-cylinder 50hp Gnome rotary engine: the replica has a new 7-cylinder 110hp Rotec radial engine.

The replica’s propeller is bespoke, created by computer-controlled machinery. Engine to propeller speed is reduced by a ratio of 3:2.

On the original, the outer ailerons were pulled downwards by the control stick into the airflow: on the replica, there is a closed circuit – each moves in the opposite direction to the other – which improves controllability. (The stick also controls the canard; the inner ailerons are not controlled.)

The original’s wing spars were made of spruce: on the replica, they are made of Douglas fir, which has higher strength properties, as are struts between the wings.

The replica has the benefit of modern dope and Diatex polyester yarn sewn in place, with seaplane resin eyelets for drainage: in contrast to the use of tacks and Pegamoid cloth on the original.

For the construction of the airframe, the replica has:-

modern glues, with glue applied where it was not originally used;

certified bracing wires (it is diamond braced, with flying, landing and incidence wires), and

a study on load testing of types of bamboo, in comparison to aluminium and ash, which was used again for the outriggers.

The main float of the replica has:-

the innovative design features of the original, including an aluminium floor, but now with 2 full length aluminium stiffeners and 4 in each step, with modern techniques and methods of analysis;

increased buoyancy of 109% in excess of the buoyancy required to support the maximum weight of the complete aeroplane – the minimum current regulatory requirement is 80%, and

5 watertight compartments, which would provide flotation in the event of damage.

The original did not have any instruments. (Height and speed instruments were reported as being tested on Waterhen in The Aeroplane magazine, 16 October 1913.) The replica has an airspeed indicator with analogue/ LCD displays and custom scale, and a Hall airspeed indicator, plus a volt meter.

Computer modelling has enabled gathering of data and verification of the overall replica aeroplane’s design, leading to some bracing wires being replaced with steel tubes, and additional tubes installed.

Photos of the replica build (Note the aluminium outriggers prior to the change to bamboo) and of surviving parts are here.

FOR AN INTERACTIVE 3D MODEL OF THE REPLICA WATERBIRD, click here

On 11 December 1911, through agents Arthur Edwards & Co. of London, Wakefield filed UK Patents No. 27,770 and No. 27,771 relating to the means for attachment and a stepped float, which were respectively granted on 12 September 1912 and 18 March 1913. The objects of the inventions were to ‘prevent jar when rising from and alighting upon the water, and to provide an attachment of such a character that when the hydroplane is upon the water the aeroplane is suspended therefrom’; and to ‘provide an aeroplane with means for enabling it to alight, float and travel along the surface of water and to rise again therefrom’. The method of attachment included looped rubber rings, to act as shock absorbers. Wakefield had thus combined features of construction in a novel way.

On 13 November 1913, Wakefield obtained UK Patent No. 18,051 for the float of a seaplane to support its own weight or the greater part of such weight during flight.

Also, Wakefield wrote an article on the principles of flying from water, which was published in The Aeroplane magazine, 10 April 1913: click here to view the article.

A concave and V shaped float, in a move away from the flat bottom of initial floats. On 12 February 1914, Gnosspelius obtained UK Patent No. 10,801; which construction is used on every seaplane float today.

The control column –  ‘stick’ – for which Roe obtained UK Patent No. 26,099 on 14 November 1907. Like the Wright Flyer, which first flew 8 years beforehand, and the Roe I Biplane of 3 years earlier, Waterbird is a biplane with pitch control by way of a forward-mounted, pivoting canard, albeit the Wright Flyer had a bicanard. The single control column differed from the Wright design which had a lever for each hand, and from the control wheel used by Glenn Curtiss. The connection from Waterbird’s stick to the canard is by way of a Farman-type pole. – The replica Waterbird has a closed circuit of wires, pulleys and horns for the outer ailerons.

The turnbuckle, for which Roe obtained UK Patent No. 17,740 on 30 March 1916. The Roe 1 included turnbuckles, being of a simple home-made type. Turnbuckles, initially known as strainers, were marketed by Avro through their Aviator’s Storehouse. Products included bamboo, fabrics, propellers, shock absorbers and wood. Marketing was ultimately by the Aircraft Supplies Company Limited as sole selling agents. Supplies of Admiralty, A.G.S. and Binet types of turnbuckles were not equal to demand, whereas Avro increased output such that it made an annual £40,000 profit on turnbuckles alone for a number of years in and subsequent to World War One. – The replica Waterbird has an estimated 250 turnbuckles.