On 28 March 1910, Henri Fabre flew his Hydravion from Etang de Berre, near Marseilles, so achieving the first successful flight in the world from water. All the more remarkable since he had never been on an aircraft before, either as a passenger or as a pilot.

Edward Wakefield had visited him at Marseilles shortly beforehand. Wakefield did so again, this time in the company of Oscar Gnosspelius, during October 1910 at the Grand Palais, Paris where Fabre’s aircraft was being exhibited.

The Hydravion was transported by using a dolly.

Like Waterbird, the Hydravion had a Gnome 50 hp engine, but the airframe was not of a practical design. Fabre’s floats were flat-bottomed, with a curved upper surface, so as to generate lifting force either in the air or on water; in contrast to Wakefield’s floats which were ‘stepped‘.

On 12 April 1911, at Monaco, Fabre’s aeroplane was damaged beyond repair; but restored and is now in the Air and Space Museum, Le Bourget Airport, Paris.

Fabre sold a Hydravion to Raoul Badin, one of his employees. Badin attemped to fly it from lac d’Enghien, near Paris. In 1911, Badin invented an airspeed indicator, which became known simply as the ‘Badin’. 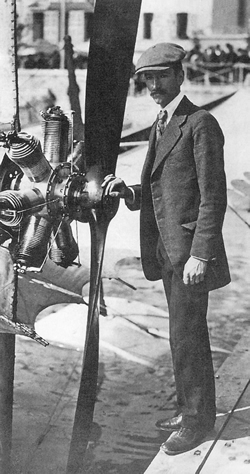