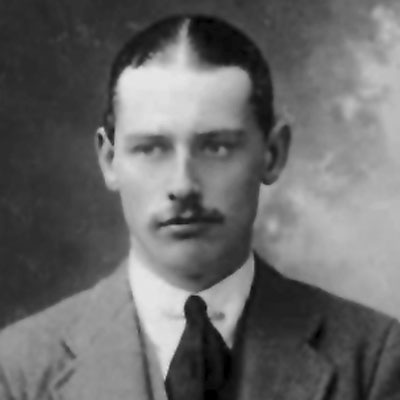 A 2nd Lieutenant in the Royal Field Reserve Artillery from Frome, Somerset.

On 9 September 1912, John Trotter became the first pupil to receive a lesson at the Lakes Flying Company, the first British hydro-aeroplane school. He passed his tests on 12 October and on 12 November was granted Royal Aero Club (‘RAeC’) Aviator’s Hydro-aeroplane Certificate No.360 – see RAeC’s record at the top of this page. This was the first Certificate with the tests taken on a hydro-aeroplane.

Oscar Gnosspelius was requested by Trotter to design him a two-seat hydro-aeroplane, which was built by Borwick & Sons. In The Aeroplane magazine of 10 April 1913, it was commented that ‘Mr. Trotter is getting well on with a large and powerful machine on the newest and most approved lines’. The Gnosspelius-Trotter biplane was launched on 8 September 1913, but made its last flight on 11 November.

On 7 July 1913, Trotter was intending to land Gnosspelius No. 2 at Parsonage Bay, some 200 yards offshore, when he misjudged the descent rate. Realising that he could not regain control, he jumped from a height of 12 or 15 feet, seconds before the aeroplane hit the surface. He only sustained a cut on the chin, and damage was limited to a broken propeller. – This ‘mishap’ was reported in the Westmorland Gazette, 12 July 1913.

Trotter served in France during World War 1, but his service record shows no mention of aviation. He was awarded the OBE in 1916 for services with the British Expeditionary Force.

He was not the only pilot associated with Windermere to have jumped from an aeroplane! Flight Commander John Cripps commanded Royal Naval Air Station Windermere from May 1916 until January 1917. He was previously Senior Flying Officer at RNAS Great Yarmouth. On 9 September 1915, he had been flying a B.E.2c at night to intercept an airship raid when the engine stopped. Preparing for a forced landing, he was unable to make out the ground because of darkness and mist. Concerned that bombs on board might explode on impact, he jumped. He was unhurt, and there was very little damage to the aeroplane.

Survivability of accidents was part of the reputation of hydro-aeroplanes. For example, on 10 February 1912, Hugh Robinson jumped just before his Curtiss hit the water at Antibes, near Nice, France and was unscathed.

Having witnessed aeroplane accidents on land, it was Edward Wakefield‘s foresight in 1909 that it would be safer to land on water.