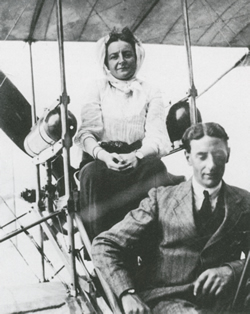 Gertude Bacon was an aeronaut, author, journalist and lecturer, a promoter of STEM – like her father

She would spend Saturday or Sunday afternoons at Brooklands, where she was part of the ‘inner circle’. There, in 1910, she made her second passenger flight in an aeroplane.

On 16 November 1899, during a balloon voyage (her third) to observe a shower of meteors, Gertrude Bacon, her father and Spencer were confronted with the prospect of being blown out into the Atlantic yet unable to make the balloon descend. In the event, after 10 hours aloft and only a mile and a half from the coast, a very rough landing was achieved during a gale. She sustained a fractured arm upon the first impact with the ground and her father a lacerated leg caused by a barbed wire fence. The only thing her father was genuinely concerned about was wasting the telegram he was writing for The Times. Her feelings were of wrath and rebellion. ‘I was young [25], and life was so sweet and so many pleasant things lay before me. How cruel, how unfair, to catch me like this and kill me slowly, as a rat in a trap, at my age! … Next morning, grinning policemen recognised us in the street – it wasn’t difficult. My arm was in a sling and my father was wearing a Welsh farmer’s trousers, and the back of his coat was a plaster of mud, which he absolutely refused to have brushed off.’

‘And then began to appear notices of the great Aviation Meeting – the first ever. There were no two words about it – I must go; and since there was no one to go with, I must go alone. … The lower wing was five feet from the ground, and there was no step to help one up. How I got up I do not know, and what I sat on I do not comprehend. I was only conscious that Sommer, when he scrambled in after me, was very close in front, wedging me tightly between himself and the extremely hot radiator of the engine behind [not having previously carried any passenger, he had not turned his attention to providing a seat]. … The motion was wonderfully smooth – smoother yet – and then – ! Suddenly there had come into it a new, indescribable quality – a lift – a lightness – a life! Very many there are now who know that feeling: that glorious, gliding sense that the sea-bird has known this million years, and which man so long and so vainly has envied it, and which, even now, familiarity can never rob of its charm.’ After landing, which she did not feel or realise, the noise of the engine caused her to be deaf for 2 or 3 minutes.

This illustration of the flight is the first of a woman on board an aeroplane.

A letter to Edward Wakefield before flying at Windermere

‘Having tried most means of aerial locomotion it seems my clear duty to sample a hydro-aeroplane – and I am prepared to come at any time, and pay any fee you mention for the great privilege – if only it might be accorded me.’

Flying in Waterhen around Windermere (see photo at margin)

Waterhen, a biplane and the immediate successor to Waterbird, had made its first flight twelve weeks beforehand. ‘In forty-two minutes we circled the entire lake, flying conscientiously over every nook and bay. Around us, sleeping in blue summer haze, lay the mountains – Wetherlam, Langdale Pikes, Crinkle Crags, Helvellyn, every name a poem. … I was sad when the circuit was complete, and Hill of Oaks once more beneath.’ She took photos during the flight [‘Bottom right’ is of Storrs Hall Hotel] and wrote an article for the Aeroplane magazine on 1 August 1912, in which she described the view of Windermere as ‘beating every other flying-ground’.

Flying in the Admiralty Deperdussin at Windermere (see photo at top of this page, taken at Cockshott)

Wakefield entered into a contract with the Admiralty to convert Admiralty Deperdussin M.1 into a hydro-aeroplane, and Gertrude Bacon went to see the trial trips. ‘Would you like,’ said Mr. Wakefield to me, ‘would you like to be the first woman to fly in a hydro-monoplane?’ Would I not! So they hoisted me in (it was a difficult matter right out on the water). It was thrilling, but I cannot pretend it was comfortable. Seventy miles an hour, immediately behind the great engine, without wind-screen or goggles, was a fearsome experience. The eyes seemed blown from my head and the breath from my nostrils. It is a literal fact that I discovered myself, unconsciously, holding on to my nose, so convinced was my instinct that it also would be blown away from me!’

So, by 16 July 1912, she had achieved the unique feat for a woman of having tried ‘aerial means of locomotion’ in a biplane, hydro-biplane, monoplane, hydro-monoplane, balloon and airship.

‘To fly over water is certainly to taste to the full the joy of flight, and when the water is Windermere and the scenery the pick of English Lakeland, which is to many a traveller the pick of the whole world, in its soft intimate loveliness, the result is something not lightly forgotten.’

Visiting Windermere, and A. V. Roe & Co. at Brownsfield Mills, Manchester, where Waterbird was built as a landplane

‘I visited the aerodromes and aeroplane works that by then were springing up in all directions. One of the earliest of the latter I found in a mill outside Manchester, where half the building was devoted to the manufacture of men’s braces, and the other to ‘Avroplanes’. Of the former the most romantic example was undoubtedly Windermere.’

‘You were good indeed to me, and gave me one (or should I say two) of the very rarest treats of my life. I daresay you saw that the ‘Mirror’ had reference and a picture [taken by her]. I should be proud indeed – for I also am an enthusiast – and keen beyond measure on the progress of the work to which you have made such magnificent contribution. Again a thousand thanks for your goodness to me.’

The Record of an Aeronaut: Being the Life of John M. Bacon: 1907

Gertrude Bacon was a popular lecturer for nearly a quarter of a century. Her glass slides were displayed by a lanternist. Lanterns were prone to total failure and became red-hot such that more than once the gas caught fire with flames rising high!

‘Some remarkable photographs of Lake Windermere, taken from the deck of a hydro-aeroplane in full flight, were shown by Miss Gertrude Bacon yesterday in the course of a lecture at the Camera Club.

‘Aerial photography, she said, was still infinitely easier from a balloon than from any type of aeroplane. In monoplanes, which had it all their own way for speed, photography was all but impossible, but a biplane, which was more suited for observation, gave a certain amount of opportunity.

‘But the accelerated speed made a very rapid shutter necessary, the jolt and jar of the engine was a disturbing factor, while if the big propeller did not hide the view it considerably darkened it, and sideways the field was obstructed by the huge wings.’

‘A well-known lecturer on Flying Machines includes in her slides a photo of Admiralty experiments with hydro-aeroplanes on Windermere.’ – The Lakes Herald, 26 February 1915.

This flight was typical for Gertrude Bacon in that it was new and fulfilled a desire for which she had to undergo considerable discomfort, yet her love for flying shone through, being described in her usual wonderfully eloquent style.

‘The uninterrupted views were unsurpassed, especially when, in his fruitless endeavour to rise above the ‘bumps’, our pilot drove his craft higher than usual and we entered and climbed above the scurrying clouds, and I saw again that matchless scene of old ballooning days – cloudland from aloft. Kent was green and gold in the harvest, the Channel was as a deep blue meadow in which a flock of white cloudlets wandered as sheep, and tiny white-horses stood for the daisies, while two endless silver ribbons that cut the world in twain represented the coasts of England and France.’

On 26 August 1919, along with the wife of the pilot Sholto Douglas (later Marshal of the RAF and Chairman of British European Airways) who sat with him in the open cockpit, Gertrude Bacon became the first woman to fly on an airline service between London and France. The journey from Cricklewood, via Hounslow to clear customs, to Le Bourguet, Paris was extremely rough, taking 4 hours due to a strong headwind. The converted twin-engined Handley Page bomber with an unenclosed space in the fuselage, was ‘well-nigh prehistoric, most bitter cold [despite the fur-lined coat provided], the noise of the engines being almost overwhelming and speech quite impossible’. At Paris, it was a walk of some distance to catch a tram and, had it not been for an American lady with a tea-basket in the motor in which she was taking an afternoon’s ride, there would not have been any refreshment for many hours.

On 28 July 1939, Douglas was in an aeroplane which crashed at Kirkby Moor to the south-west of Windermere. Fellow passenger Air Marshal Sir Christopher Courtney sustained a fractured kneecap and was hospitalised. Courtney was about to succeed Air Chief Marshal Sir Hugh Dowding as Air Officer Commander-in-Chief Fighter Command; instead the appointment went to Douglas.

Gertude Bacon’s father’s career included carrying out experiments on 10 November 1902 with the Admiralty for detection of submarines by balloon, from Douglas, Isle of Man, via Abbey Head on the Solway coast, to near Dumfries. He photographed the seabed from a height of 600 feet, which Gertude described as ‘absolutely unique in the annals of photography’. This balloon voyage had only been made once before, eighty-five years earlier, and was the culminating point of his aeronautical career. – In 2013, the Fédération Aéronautique Internationale inducted him into its Ballooning Commission Hall of Fame.

Landing in a balloon

On 20 August 1888, John Bacon left this world for the first time and landed at Hatfield. ‘The  farm owner was amongst several men who ran up and was out of breath to the point of collapse. “Look here; you’ve a horse and cart somewhere, and I must have it. What will you want?” The reply came “I’m broken-winded now for life, and you’ll have to pay for that; then there’s my hayrick getting wet, that’ll be another five shillings”; and so on!’

The 1899 landing under the heading Wrath and rebellion above, took the occupants through the top of an oak tree and rolling with large torn branches among gorse bushes in the next field. ‘Soon in the distance came the sound of excited voices, calling to each other, but in an unknown language, and a little group of men came panting up, but halted at a respectable distance from the struggling, tossing monster. “Come and help us!” shouted my father; then as they still did not move: “Come and help, you fools! Don’t stand gaping there!” But never before in the memory of man had so strange an object fallen from a cloudy sky on the outskirts of Neath, and for a few moments longer the cautious Welshmen refused to approach.’

The 1902 landing under the heading Reverend John Mackenzie Bacon above, was in a bog at the Glen of Glenesslyn. ‘Men approached who kept their hands in their pockets and gave no help. John Bacon enquired if there was a cart to be had. Well, they could na’ be sure. “But of course there is a cart, wouldn’t money hire it?” This time, the reply was “Well, maybe the horse is tired!”