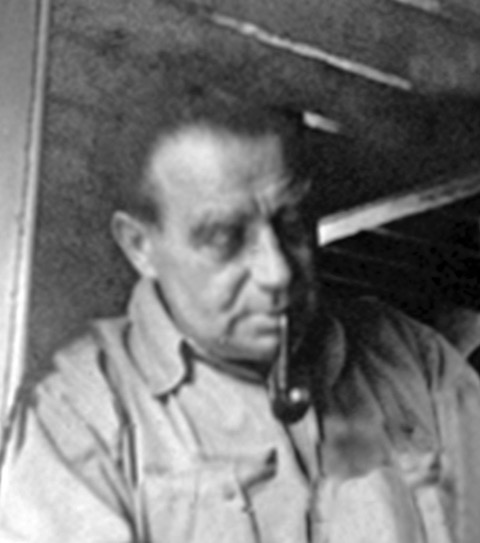 Pioneer of making drawings from the air

‘Cliff’ Fleming-Williams was a pioneer of making drawings from the air so as to prove the use of aeroplanes for military observation. He made a drawing, elaborated on reaching ground, of Brooklands. – The Illustrated London News, 8 April 1911. The equipment comprised a glove for the left hand to protect from the cold, the right hand being protected by the lid of a drawing box fixed to the knee. A compass was strapped to the left wrist. Pencils were sharpened at both ends and attached by string so as to prevent them falling.

Waterbird was commissioned by Edward Wakefield, who was an advocate of using hydro-aeroplanes to relay information by way of an observer and wireless, having learnt the value of scouting in the Boer War. Testing of Waterbird took place at Brooklands during May-July 1911 and then conversion to a hydro-aeroplane at Windermere with the first flight on 25 November 1911.

On 20 November 1909, a letter from Fleming-Williams was published in Flight magazine. It set out that having made 27 models, he at last arrived at a type which had covered a quarter of a mile several times. He had given a demonstration of its capabilities before the representative of a large firm of buyers that week; not only was the buyer perfectly satisfied that his model had beaten the world record, but gave him a large order for them.

Fleming-Williams experimented with model hydro-aeroplanes and wrote an article setting out his deductions in The Aeroplane magazine, 29 December 1911. He achieved the first model hydro-aeroplane to lift off water. A print of this article was found to be included within Wakefield’s personal papers.

In November 1909, he had achieved the world long distance record for an elastic-driven model: a twin propeller pusher. It was acknowledged as ‘the first successful and reliable model aeroplane made’ – The Pioneer Model Aeroplanes. The Twin-Pushers by R F L Gosling in the Aeromodeller Annual 1976-77. Manufactured by Ding, Sayers and Company, it was sold by Gamages department store in London – this advert is from The Aero magazine, 3 May 1910.

The Aero magazine, 28 December 1910, reported on a model flying meeting on 18 December. Those present also included Fairey and Ding:

Fairey was Richard Fairey (later Sir, MBE, Hon. FIAS, Hon. FRAeS). In 1915, at the behest of Commodore Murray Sueter on behalf of the Admiralty, he formed Fairey Aviation Ltd at Hayes, Middlesex. Upon the outbreak of World War 1, he had applied to join the Royal Naval Air Service, but was turned down by Captain Oliver Schwann (who had taken off in a hydro-aeroplane at Barrow-in-Furness on 18 November 1911) since his skills were needed as Short Brothers’ chief engineer. Fairey aeroplanes included Short 827 No. 8560, built under contract, which served as an advanced trainer for the RNAS at Windermere in 1916-17, and also the Swordfish torpedo bomber. (Fairey initially worked for The Jandus Arc Lamp and Electric Co Ltd of London, and in 1905, aged 18, oversaw electric lighting installation at Heysham Harbour’s docks and warehouses.)

Ding was Rowland Ding. In September 1914, upon Herbert Stanley Adams‘ departure for RNAS service, he was appointed by Wakefield as Chief Pilot of the Lakes Flying Company at Windermere. Ding offered Fleming-Williams a job there – see below under the heading ‘Seaplane ground school instructor, artist and general manager’.

Flight magazine, 18 October 1913, included that he claimed to be the originator of:-

(i) the first model hydro-aeroplane off water;

(ii) the system of floatplanes as separate attachments to floats to form hydroplanes;

(iv) the propellers behind the tail-type;

(v) hollow spars made in 2 sections;

– By using 8 strands of strip rubber to each propeller, he achieved 1,000 turns. He found 2 propellers to be a great help to continuity of direction provided they ran at the same speed, or it was easily possible by winding the leeward one a few more turns to make his model fly straight across a wind.

In 1913, Fleming-Williams submitted application for UK Patent No. 5,003 covering improvements relating to hydro-aeroplanes, so as to enable them to travel through rough water and by constructing the float such that it offered minimum head resistance. That is, by attaching hinged and sprung, automatically adjusting planes to the float bottom. It was granted in 1914.

He also successfully applied for UK Patents to:-

i. absorb shocks to toy or actual flying machines and to maintain equilibrium during flight in 1911, and for a French Patent in 1910;

iii. deliver water or other liquid under pressure in 1919 (whilst back living at Windermere), and for a United States Patent in 1921.

Further, Car Cruiser Caravans Ltd applied for United States and Canadian Patents for his invention of a portable building with proof against bullets, bombs and shell splinters in 1941 and 1943 respectively.

Turned down for pilot training in the Royal Flying Corps due to his age, Fleming-Williams joined the staff of the seaplane flying school at Hill of Oaks, Windermere in early 1915.

His first task was to ‘specially design and carry out’ a booklet (Note that the cover features the P.B.1 – see below under the heading ‘Seaplane designer’). A full page advert for the booklet appeared in The Aeroplane magazine of 20 January 1915. It was described in Flight magazine, 5 February 1915, as ‘more in keeping with one of the expensive editions to luxe to which of late years the big publishing houses have accustomed us’. The Aeroplane magazine, 3 February 1915, also had high praise ‘One of the most artistic productions which has resulted from the aircraft industry up to the present. It is the work of the well-known artist, Mr. C Fleming-Williams, who is not only one of the few people who can draw an aeroplane correctly, but is a master of pure draughtsmanship where land, water or air are concerned. His black-and-white sketches of Windermere are themselves gems of black-and-white art.’ Included was a sketch of the hangars at Hill of Oaks: the bungalow to where he moved in 1916 is at top left.

One of his drawings depicted a flying lesson by moonlight, which lessons were unique to Windermere. Another was entitled A Busy Day on Windermere (Note the P.B.1 at centre – see below under the heading ‘Seaplane designer’). The drawing at the top of this page was entitled Air Raiders in the Making.

He instructed on the theory of flight and aeroplane design. He was an accomplished lecturer, having developed communication skills through taking Sunday School classes for his father who was a Congregational Minister. The school’s booklet promoted that ‘Illustrated lectures are delivered by an expert – not dry-as-dust mathematics – but interesting talks knocked home with pictures and humour’.

The breadth of his skills became of considerable value in a short space of time, such as to be described ‘a capable right-hand man’ in The Lakes Herald, 26 February 1915. He was made a Director.

He had responsibility for marketing (Note the P.B.1 shown passing under the port wing – see below under the heading ‘Seaplane designer’), administration (Note a drawing by him at the letterhead) and repair together with modification of seaplanes.

Fleming-Williams designed the P.B.1 seaplane and took charge of its construction at Cockshott, Bowness-on-Windermere.

Having been appointed as a Second Lieutenant in the RFC on 21 August 1916, Fleming-Williams was posted to the School of Military Aeronautics at Reading. He rose from Assistant Equipment Officer to become Chief Instructor, and was promoted Major. This photograph shows him delivering a lecture on the theory of flight.

Fleming-Williams had many illustrations published in magazines and books, as early as 1901 in The Graphic when aged 21.

He illustrated The Aeroplane Speaks by Captain H Barber, which was reviewed by the Editor of The Aeroplane magazine, 24 January 1917. ‘His work is well known to this paper, and who was about the first professional artist who learned to draw an aeroplane which looked like one. His illustration of the interior of a wing was particularly valuable, and so are his diagrams of aeroplanes in various attitudes, and the diagram of a modern cockpit with its “switchboard full of nickel-plated muckin’s”. All his drawing is good. The sketches of aeroplanes and their attitudes in the Prologue are excellent.’

He was commissioned by Brigadier-General Archibald Maclean of the RAF [formed in 1918] to create a large scheme of paintings and lithographs documenting its activities at sea, plus recruitment – Courtesy of the RAF Museum, and the work of the WRAF. In addition to his background at Windermere, where for example there were 9 F.B.A. flying boats at various times, he also visited Royal Naval Air Station Felixtowe for research. 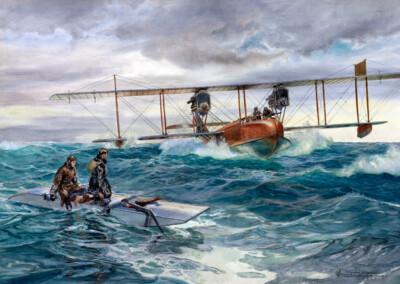 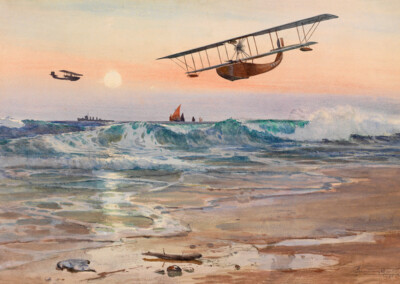 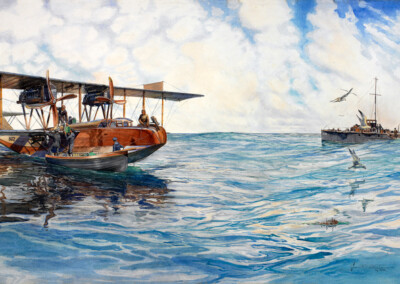 Food: a motor launch, called by wireless, brings petrol for a flying boat

– All the above watercolours are © Crown Copyright. IWM.

Following demobilisation from the RAF in 1919, he returned to Hill of Oaks, Windermere for about 1 year and re-established himself as an illustrator.

Fleming-Williams then formed Car Cruiser Caravans Ltd at Hayes, to build the caravans he designed which featured streamlining.

In the same year as Fleming-Williams designed and built his prototype ‘car cruiser caravan‘, Glenn Curtiss, who had made the first practical flight in a hydro-aeroplane on 26 January 1911 at California, designed a ‘camp car‘. – Scientific American magazine, 7 February 1920.

– Thanks to David and Julie Fleming-Williams, grandchildren, for providing photographs and information.