The RAeC, formed in 1901 and granted a Royal prefix in 1910, is still the UK representative on the FAI the world air sports federation, albeit pilot licences and ratings have been issued by the Civil Aviation Authority since 1972.

History came full circle with successful nomination of the replica Waterbird by the RAeC to the FAI for award of the 2018 Phoenix Diploma.

THE RAeC AND THE FAI

‘Letter from the Aéro Club de France, of 17 February 1912, intimating that they had not granted any Aviators’ Certificates for flights carried out on hydro-aeroplanes, and that, in their opinion, the present rules did not cover such an event, was read and noted. It was unanimously resolved to give notice to the FAI that the RAeC world raise the question at the next [FAI] Conference.’ – Minutes of Executive Committee meeting of the RAeC, 20 February 1912.

‘Letter from Capt. E. W. Wakefield, of 21 February 1912, with regard to Hydro-aeroplane Certificates, was read. It was unanimously resolved [taking the opposite view to France] to grant provisional Certificates in respect of tests carried out on hydro-aeroplanes, such certificates to be subject to confirmation by the FAI, the tests being the same as those required for the present Aviators’ Certificates, subject to modification regarding the alighting on water.’ – Minutes of Executive Committee meeting of the RAeC, 27 February 1912.

‘At the FAI Conference held in Paris on 15 and 16 March 1912, the suggestion of the RAeC that aviators’ certificates should be issued in respect of flights made on hydro-aeroplanes under the existing rules was adopted, pending special regulations to be approved at the Vienna Conference in June next.’ – Minutes of Executive Committee meeting of the RAeC, 19 March 1912.

Certificates recognised by the FAI up to 31 December 1912, as published, were:-

Wakefield accompanied the representatives of the RAeC, Griffith Brewer and Harold Perrin, to an Extraordinary Conference of the FAI held in Paris on 28 January 1913.

‘The FAI decided that the ordinary Aviators’ Certificates should be valid for flights over both land and water. It was further decided that certificates should be granted in respect of tests made over the water, but that such certificates should not be valid for flights over land. It will therefore be seen that it is not necessary for the holders of the FAI aviator’s certificate to obtain a special water certificate. In the case, however, of aviators who have passed the water tests only, their certificates will be endorsed accordingly, and do not imply qualification for land flights. The holder of a certificate so endorsed can have it converted into a full FAI Aviator’s Certificate, on carrying out the landing tests at present in force.’ – Minutes of Executive Committee meeting of the RAeC, 4 February 1913.

An illustration of the above conditions can be seen in the documents of Donald Macaskie. Macaskie’s log book of civilian flying – extract at the foot of this page – records that he flew in the entire Windermere fleet, as it then was, of Waterhen, Seabird, the Lakes Monoplane and a Blériot. His tests were accomplished on Waterhen 4-22 September 1915. The extract from his Aviator’s Certificate No. 1788 at the foot of this page, issued on 24 September, carries at top left the diagonal handwritten endorsement of ‘Hydro-aeroplane’, meaning he was only licensed to alight on water. His index card at the RAeC was therefore headed ‘Hydro-aeroplane’. He transferred to the Royal Flying Corps and so would need to re-take his tests on land. He did so at RFC Dover aerodrome, as part of his RFC pilot training. By this stage of World War One, the military was conducting flying tests as well as the RAeC. The summary in his log book of military flying at the foot of this page, shows that on 22 February 1916 he was awarded what he called a ‘Super Ticket’, as it converted his Certificate so as to qualify him for both water and land.

The term seaplane was coined by Winston Churchill on 17 July 1913, when he answered a question in the House of Commons as First Lord of the Admiralty.

THE AERO CLUB OF AMERICA

The first British hydro-aeroplane school was set up by the Lakes Flying Company in 1911.

The Admiralty took an early interest in training pilots at Windermere. ‘Bristol school or Wakefield hydro-aeroplane school to train those pilots that cannot be received at Eastchurch at present.’ – Recommendation in a Paper entitled ‘The Development of Naval Aeroplanes and Airships’ dated 23 January 1912, by Rear Admiral (later Admiral Sir) Ernest Troubridge, Chief of Staff of the Admiralty.

The first full UK Aviator’s Certificate with the RAeC tests taken on a hydro-aeroplane was achieved at Windermere by 2nd Lieutenant John Trotter on 12 November 1912. That is, Trotter’s Aviator’s Certificate No. 360 was issued before introduction of the Regulations following the January 1913 Paris Conference, so entitling him to carry out both water and land flights. Note therefore that his index card is not endorsed ‘Hydro-aeroplane’. The official RAeC observers for his tests were Reverend Sidney Swann, a founder member of the Aero Club, and Major Robert Brocklehurst. Swann, like Wakefield and Oscar Gnosspelius, was inspired by having attended the Blackpool Aviation Meeting in 1909, and carried out experiments at Aintree racecourse, Liverpool and at Crosby Ravensworth, near Shap. Brocklehurst carried out experiments at Eastchurch and Windermere.

The first and second Aviators’ Certificates awarded by the RAeC endorsed ‘Hydro-aeroplane’ were to Windermere-trained pilots. Joseph Bland was granted Aviator’s Certificate No. 614 on 30 August 1913, and Oswald Lancaster No. 765 on 15 April 1914. Note that Trotter’s Certificate carried the date of the RAeC Committee meeting when issued, whereas Bland’s and Lancaster’s Certificates were back-dated to when the tests were passed (which applied to Nos. 453-864).

The cost of tuition was £75 until the Certificate was obtained. For Officers, it was discounted to £52 and 10 shillings upon signing an agreement, and £17 and 10 shillings on finishing tests. Extra practice was £9 for the first hour and £6 thereafter.

The RNAS granted a contract for training pilots in December 1915. The private Seaplane School was taken over on behalf of the Government, and on 3 May 1916 the first flying course under the total control of the RNAS commenced. Amongst that intake were 9 Canadian and 2 American pupils. This photo is of 5 Canadians, including James Cronyn from Toronto – in his uniform of a Captain in the Canadian Infantry, and 1 American. There were 5 more Canadians on subsequent courses. 2 Canadians went on to win the Distinguished Service Cross, and 1 Canadian and 1 American to win the Distinguished Flying Cross.

In May 1916, training at Cockshott and Hill of Oaks became Royal Naval Air Service Unit Hill of Oaks. Large numbers of probationary Flight Sub-Lieutenants were sent to Windermere for basic instruction, most of whom had already qualified on landplanes. They were on the books of HMS President II (an accounting base at Crystal Palace, London), having already undertaken a 5-week course there in drill, navigation, theory of flight, aero-engines and signalling.

In June, the headquarters of the RNAS at Windermere moved from Cockshott to Hill of Oaks, and, with the departure of civilian instructors, the name was changed to Royal Naval Air Station Windermere. Please see the photograph at the top of this page. – Note the White Ensign flying. RNAS Windermere continued operations until the end of June 1917.

Lakes Seabird. Also known as the Avro. Changing student pilots was speeded up by a system of doing so without stopping the engine, using motor launch Sarah – this drawing is by Clifford Fleming-Williams.

Blackburn Improved Type 1. Also known as the Land/ Sea monoplane. Note the cutouts at the wing roots to improve visibility and that undercarriage skids remain from when it was a landplane.

With ground school on the theory of flight and design, and observation at the workshop of engines and interior construction of aeroplanes, the system for practical tuition of Windermere student pilots was:-

1. Passenger flights to get used to being in the air.

3. Pupil given free control of lever.

4. Pupil in pilot’s seat given full control of lever and rudder with instructor behind.

5. Solo taxiing to learn control of engine and art of acceleration.

Also, a hydroplane was used so as to give students practice in travelling fast over water and judging speeds. It was capable of 40 knots, made from a float previously fitted to the Gnosspelius-Trotter, and powered by a 40hp Clerget engine which Gnosspelius had purchased in 1910 for his No. 2 hydro-monoplane.

New Regulations were introduced to provide for hydro-aeroplanes in the Royal Aero Club’s tests, effective 1 January 1914:-

1. Candidates must accomplish the three following tests, each being a separate flight:-

A and B. Two distance flights, consisting of at least 5 kilometres (3 miles 185 yards) each in a closed circuit, without touching the ground or water; the distance to be measured as described below.

C. One altitude flight, during which a height of at least 100 metres (328 feet) above the point of departure must be attained; the descent to be made from that height with the motor cut off. The landing must be made in view of the observers, without restarting the motor.

2. The candidate must be alone in the aircraft during the three tests.

3. Starting from and alighting on the water is only permitted in one of the tests A and B.

4. The course on which the aviator accomplishes tests A and B must be marked out by two posts or buoys situated not more than 500 metres (547 yards) apart.

5. The turns around the posts or buoys must be made alternately to the right and to the left so that the flight will consist of an uninterrupted series of figures of 8.

6. The distance flown shall be reckoned as if in a straight line between the two posts or buoys.

7. The alighting after the two distance flights in tests A and B shall be made:-

(a) By stopping the motor at or before the moment of touching the ground or water [‘vol plané‘];

(b) By bringing the aircraft to rest not more than 50 metres (164 feet) from a point indicated previously by the candidate.

8. All alightings must be made in a normal manner, and the observers must report any irregularities. 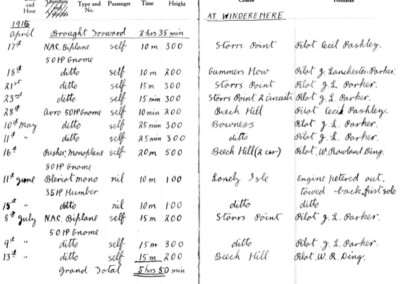 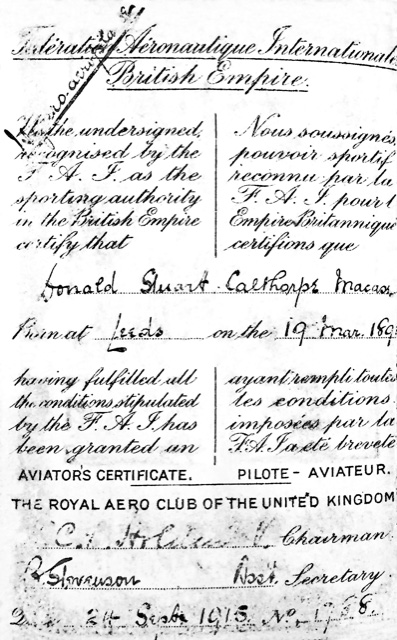 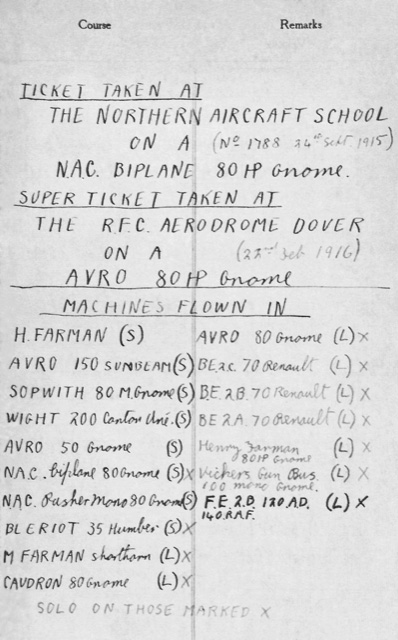