On 25 November 1911, from Windermere, Waterbird achieved the world’s first successful flight to use a stepped float. Waterbird was an Avro Curtiss–type hydro-aeroplane. The pilot was Herbert Stanley Adams (later Lieutenant Colonel).

Waterbird was commissioned by Captain Edward Wakefield from A. V. Roe & Company.

Wakefield patented the stepped float and means of attachment, for which he entered into a secret contract on 14 March 1912 with the Admiralty, and also to convert a Deperdussin, Admiralty serial M.1, to a hydro-aeroplane.

‘We believe that with the exception of the hydro-aeroplanes of the United States Navy no other machine of like nature has been so successful. … For the fame of Mr. Wakefield himself and Windermere it is to be hoped that the Admiralty may take this matter up so that we may not be left behind by any other European power.’ – Kendal Mercury and Times, 22 December 1911. 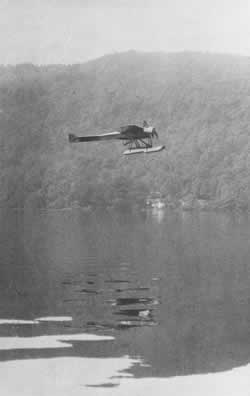 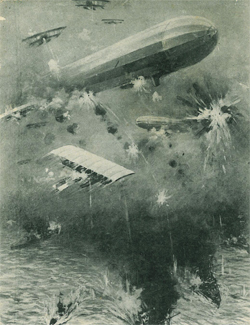 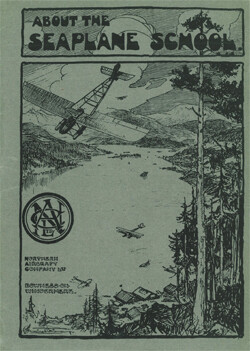 The dismantled Deperdussin arrived by rail at Windermere on 13 June 1912, and, having been successfully converted from a landplane, was flown during July by Adams, Lieutenant (later Acting Commander) Reginald Gregory and Lieutenant (later Air Commodore) Charles Samson. On 10 January 1912 off Sheerness, Samson had achieved the first launch from a British warship by flying an aeroplane fitted with air bags – HMS Africa, and on 2 May 1912 off Weymouth, the first take-off from a moving ship – HMS Hibernia.

Many, who along with me learnt during the war in South Africa, the value of scouting, believe that scouting by hydro-aeroplane will shortly become a necessity for the safety of this island. England is too far behind other powers in air craft and in flying men for both Army and Navy.’ – Letter from Wakefield to The Times, 11 January 1912.

‘Edward Wakefield was convinced that the future for Naval hydro-aeroplanes lay in scouting for the fleet and relaying back information – extending the Naval battle space over the horizon. He knew that Naval aircraft could be the eyes and ears of the fleet.’ – Commander Sue Eagles, Fly Navy Heritage Trust.

THE IMPORTANCE OF PRIVATE ENTERPRISE

On 28 February 1912, the secret Report of the Technical Sub-Committee of the Standing Sub-Committee of the Committee of Imperial Defence on Aerial Navigation was approved. The Report recommended that the Naval Wing of the Flying Corps should be established and that it attached importance to the maintenance of private enterprise in the field of aeronautics. The Report included ‘It is impossible to over-estimate the importance of experiments for the development of hydro-aeroplanes’.

Winston Churchill, then First Lord of the Admiralty and a member of the Standing Sub-Committee, when asked in the House of Commons about the Royal Navy and hydro-aeroplanes, referred to the experiments at Windermere and that ‘the results so far attained have been promising’.

On 16 April 1912, Churchill confirmed in the Commons that private hydro-aeroplane tests would continue on Windermere. Click here for image.

The term ‘Seaplane’ was coined by Churchill, when he answered a question in the Commons on 17 July 1913.

In 1918, Borwick & Sons, boat builders of Bowness-on-Windermere, were sub-contracted by Dick, Kerr and Company of Preston to construct hulls for Felixstowe F.3 flying boats.

Churchill wrote in a Minute of 10 February 1914 that ‘The objectives of land aeroplanes can never be so definite or important as the objectives of seaplanes, which, when they carry torpedoes, may prove capable of playing a decisive part in operations against capital ships. The facilities of reconnaissance at sea, where hostile vessels can be sighted at enormous distances while the seaplane remains out of possible range, offer a far wider prospect even in the domain of information to seaplanes than to land aeroplanes’.

Whilst Wakefield advocated defensive scouting, derived from his experience in the Boer War, Churchill, however, came to the view that attack was the prime tactic for defence: ‘The great defence against aerial menace is to attack the enemy’s aircraft as near as possible to their point of departure’.

Three years and one month after Waterbird’s first flight, carrier-borne seaplanes were launched against Germany. ‘The Cuxhaven raid marks the first employment of the seaplanes of the Royal Naval Air Service in an attack on the enemy’s harbours from the sea, and, apart from the results achieved, is an occasion of historical moment. Not only so, but for the first time in history a naval attack has been delivered simultaneously above, on, and from below the surface of the water.’ – Flight magazine, 1 January 1915.

The first private British Seaplane School was formed in 1911 at Hill of Oaks on the south east shore of Windermere.

For an example of the fate of Windermere students, click here.

Following the outbreak of war, Wakefield joined the Cheshire Regiment becoming commander of a Labour Battalion on the Western Front.

On 11 November 1914, the Hill of Oaks hangars were leased and the Cockshott hangar lease assigned, together with Waterhen, Seabird and the Lakes Monoplane were sold by the Lakes Flying Company to the Northern Aircraft Company Ltd.

‘Large numbers of probationary Sub-Lieutenants R.N. were sent to Windermere for basic instruction, in addition to those who had already qualified on land machines.’ – Britain’s Seaplane Pioneers by M H Goodall, Air Pictorial January 1988.

The School was taken over on behalf of the Government, and in May 1916 training operations at Cockshott and Hill of Oaks became RNAS Unit Hill of Oaks. The first planned flying course under the total control of RNAS Hill of Oaks began on 3 May 1916. The course had an international element in that it included 8 Canadians and 2 Americans.

In June 1916, the headquarters of the RNAS at Windermere moved from Cockshott to Hill of Oaks, and, with the departure of civilian instructors, the name was changed to RNAS Windermere.

The first pupil to obtain a Hydro-aeroplane Certificate at RNAS Hill of Oaks was Paul Gadbois, on 14 June 1916. He departed Windermere on 26 June 1916, but two weeks later was seriously injured in a seaplane accident. The last pupil to obtain a Certificate at Windermere was Edward Haller, on 16 August 1916. He joined the RFC, but was killed on 3 June 1917, when shot down flying a Sopwith 1½ Strutter.

RNAS personnel involved themselves in the local community, even putting on a concert. However, parents of daughters complained that the prefix to RNAS Hill of Oaks stood for Rather Naughty After Sunset!

‘Perhaps the greatest tribute we can pay Hill of Oaks, Windermere is that but for its existence, just a few years later Britain could quite easily have starved to death as a result of the U-boat blockade. Thankfully the deterrent aspect of seaplanes and other aerial craft forced enemy submarines to stay under the surface and therefore make them less effective.’ – The Airfields of Britain Conservation Trust.

On 20 May 1917, two Windermere graduates, Flight Sub-Lieutenants Charles Morrish and Henry Boswell, were officially credited with the first aerial sinking of a U-boat. Both of them were awarded the Distinguished Service Cross.

After RNAS Calshot and RNAS Killingholme, Adams was posted to the Dardanelles. On 13 July 1916, he was mentioned in despatches, and on 31 August 1917, was awarded the DSC for services in the Eastern Mediterranean.

Flight Commander Guy Price, a Windermere instructor in 1916, was posted to France and awarded the DSC on 22 February 1918 with a Bar on 16 March 1918, an ace having downed 12 enemy aeroplanes.

Flight Lieutenant John Hume, who began his training at Windermere in 1915, was posthumously awarded the DSC on 17 March 1918 for services during the Mesopotamia campaign.

On 10 May 1918, Captain Cooper Pattinson from Windermere was first pilot of an S.E. Saunders Ltd-built Felixstowe flying boat which shot down a Zeppelin at Heligoland Bight, for which he was within the first recipients of the Distinguished Flying Cross. On 16 May 1918, whilst carrying out an anti-submarine patrol, he achieved the record for the longest duration flight for a flying boat during World War 1 at that time of 9 hours 45 minutes.

On 3 June 1918, ex-Windermere pupils Captains Harold Gonyon (Canadian) and Victor Bessette (American) were also amongst the first recipients of the Distinguished Flying Cross.

On 1 November 1918, Wavell Wakefield (Edward Wakefield’s nephew, later Lord Wakefield of Kendal) landed a Sopwith Pup on the after deck of HMS Vindictive at Scapa Flow.

Doctor Arthur Wakefield (Edward Wakefield’s brother) unveiled a memorial on 8 June 1924 at the summit of Great Gable to the 20 members of The Fell & Rock Climbing Club who were killed in World War One. He was a member of the 1922 Mount Everest expedition, which included George Mallory.